Ashley, You are so Random!

Cupcakes? Ashley are you feeling alright?

Great Question Voice in my Head! The answer to that question is still to be un-announced! Alright so Ya know how Autumn and I have been talking about "My Little Pony: Friendship is Magic"? Well Autumn and I were talking about the show.

"If I could narrow you down to two ponies, they would be Rainbow Dash and Pinkie Pie."
"Pinkie Pie! YAY! Rainbow Dash! YAY! Why?"
"Because you talk a lot, (emphasis on A LOT) you're very proud, and YOUR SO RANDOM!"

So that got me to thinking! Rainbow Dash + Pinkie Pie = Ashley huh? Well I got a little clip of what is usually said to PINKIE PIE (the random, talkative one) and its said by RAINBOW DASH (The Proud One)! So here it is (Pinkie Pie You are So Random):


So I may have put a DIFFERENT VIDEO! But its still funny and cute! So can YOU see how Pinkie Pie and I are alike?
All this talk about ponies is making me feel girly! LoL. But for some reason its still a bit fun!

♥ Ya,
Ashley
This post was by Ashley Duskhunter at 6:05 PM 2 comments:

Hey Guies! It's Ashley! Well You already knew that! But anyway, if you've been checking in with Autumn you probably have seen her recent My Little Pony Post! One of the ponies is named "Twilight Sparkle" (minus the quotations). She's a sassy, purple pony. So Autumn and I decided that if W101 was My Little Pony, Twilight Sparkle would be a Duskhunter.

I took this idea into consideration:

Then I got to work. I set out to find a picture of; Twilight Sparkle (easy), Autumn (easy), and Me (pretty easy but not as easy as the last two) (whats up with that?)

Then I took a nice little border and made this: 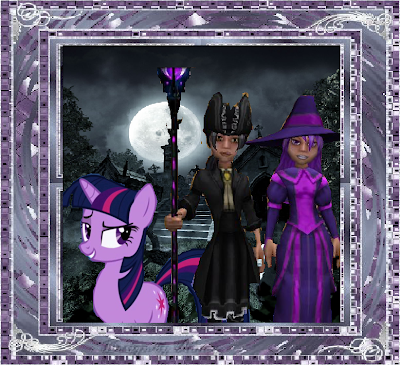 Hope Ya'll like it! (What was with the country talk there? Oh well)

Okay! So if you've read Autumn's Latest Post, you know that she's gotten "addicted" to housing/decorating. Where she's just getting addicted to it, I have always been into it. Seriously, if I'm not changing my clothes, I'm decorating my house(s)! I'm not one for questing, but Autumn is so here's how our conversations go:
"Ashley, What are ya doing?"
"Decorating my house!"
"Again? Shouldn't you be leveling?"
"... I don't know .... Should I?"
"Yes! Ashley, what's going to happen if you don't start leveling?"
"Well, I can only answer that with a quote, 'Good Things Come to Those Who Wait'"
"Yeah, it's 'Good Things Come to Those Who Wait' not 'Good Things Come to Those Who Sit on Their Bottoms Decorating Their House and Not Leveling'!"
"Well Duh! That would be too much to add into one quote!"

So yeah, that's how our conversations go. Good News: I'm actually TRYING to level! Bad News: I'm not doing that well. But anyway, back onto housing! Today I helped farm the Jade Oni with a few of my fabulous friends! And I got the Ninja Pig Statue (I know there's a "PROPER" name for it but I'm honestly too lazy at the moment to look it up :D). 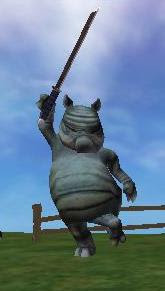 :D See Autumn! Good things come to those who are like me! :D
That's All For Now!

♥ Your Pal,
Ashley
This post was by Ashley Duskhunter at 7:34 PM No comments:

Hehehe! Okay so here's the "backstory". Autumn was on wizard101.com checking it out (to see all the updates, etc) then she came across something about mounts. "Ashley! Look what I found!" she said. Then I said "I bet you that they are going to be like they did with the pets. Free Roaming." (yeah I know. I have bad grammar sometimes). Autumn said she did think so.

Thats it for now!,
Ashley
This post was by Ashley Duskhunter at 7:37 AM No comments:

Okay so just in case you guys haven't checked in with Autumn, and you've decided to see me first (first off thanks!) You've missed something! Okay so Autumn has posted a 3 hour delay on THE FORGE! Yes, I know you may be upset about it, but it's for two reasons: 1.) West-Coast Wizards get fair amount of time. 2.) Young Wizards getting home from school! So thats all!

Luv YA!,
Ashley
This post was by Ashley Duskhunter at 3:15 PM No comments:

Wouldn't that be the best? I think it would!

This post was by Ashley Duskhunter at 2:11 PM No comments:

Okay so the weridest thing just happened to me! I was sitting at my desk in my DEATH HOUSE when a skeleton by the name of "Max" came by. He dropped this on my desk:

I have no clue what to do with it! I was hoping you guys would have a clue about it (cause as I said: I dont!).

You guies rock,
Ashley
This post was by Ashley Duskhunter at 11:44 AM 2 comments:


Visit Diary of a Wizard ConnectX